Above photo: Area near Lake Tanganyika, outside the village, reserved for drying canoes and for the distribution of fish (see tables in the background). 1950.

The photos were taken in 1950 by Daniel Biebuyck in villages located near lake Tanganyika (Uvira territory), ranging from the villages of Kingongo to Makobola. The term Bazyoba is applied locally to various populations of fishermen and agriculturalists of non-Bembe origin. Moving away from the mountains, numerous fragments of Bembe clans descended from the mountains to settle close to Lake Tanganyika on Zyoba lands. The villages are inhabited by groups such as Bahama, Basikamanya, and Balumbu, etc. 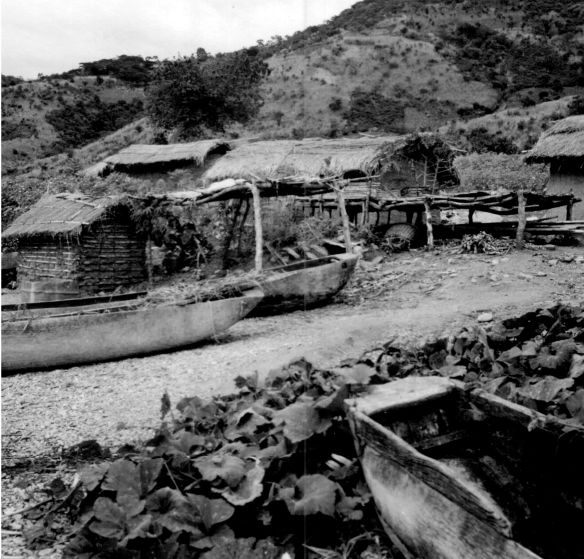 Canoes (bwato) drying near the shoreline outside the village. The place where the canoes lay is called kibuga.

Children swimming near the shores of Lake Tanganyika, which is infested with crocodiles 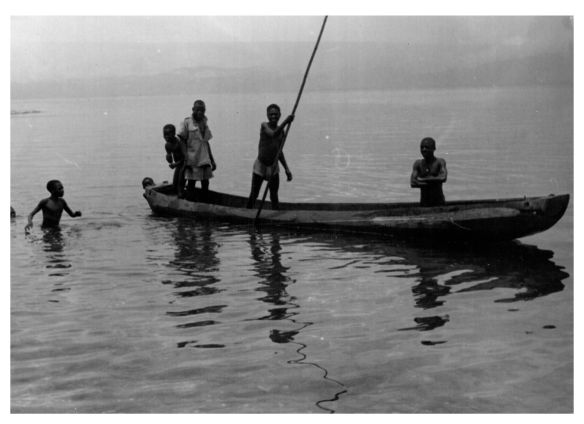 Two young men in a typical dug-out canoe, moving their boat by means of poles in shallow waters near the shore of a sometime-tumultuous lake. 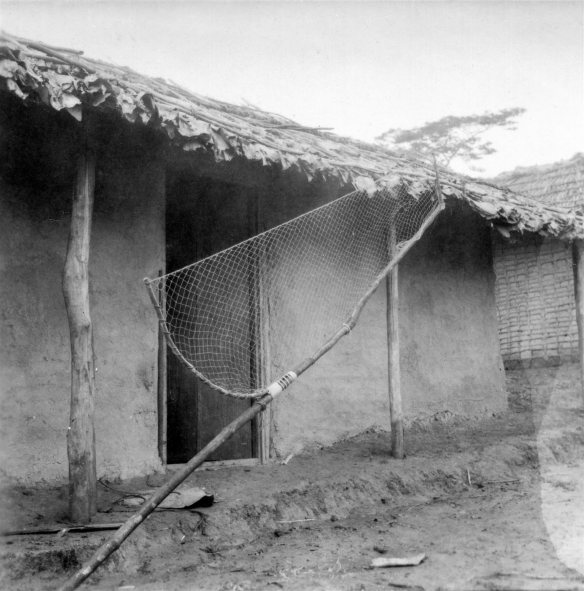 A typical Zyoba saddle-roof house as it was prescribed by the colonial administration. Resting against the roof is a large fishing net (kazyango) fixed to a rudimentary stick; this net is used by young men and children to catch fish near the shore.

A group of young men holding a fishing net they and children use to catch fish near the shore. 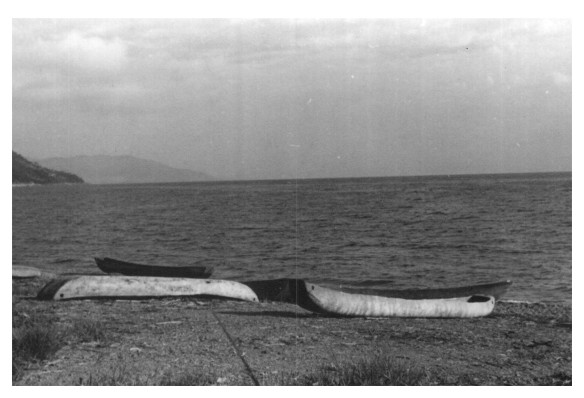 Canoes drying along the shoreline of Lake Tanganyika

Young men using axes, hoes, and billhooks prepare a mountain trail that will allow them to drag dugout canoes from the mountains where they are made by Bembe carvers to the Lake Tanganyika shore.

A group of young women, some carrying children on their hip or back, posing for Daniel Biebuyck in Makobola village. To the right, the young Evariste, whom I hired shortly after my arrival in November 1949 to help me learn Kingwana, a variant of Swahili. He was of Vira-Zyoba origin, knew how to write and speak Swahili and some French expressions. He,  Zyoba elders, and fisherman taught me much about fishing and other features of material and social culture.

Basket filled with dried ndagaa (a kind of sardine-like fish), one of the staples that was then exported to the market of Kavimvira and the cities of Busumbura and Bukavu. 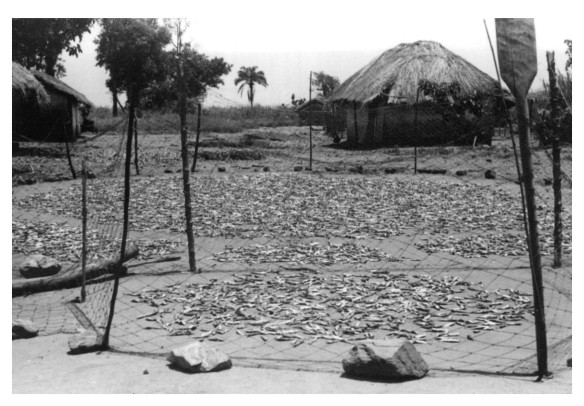 Ndagaa fish drying on the central village plaza, protected by nets, preventing the intrusion of animals.

Two fishing nets drying at the outskirts of the village. They are used to scoop ou the ndaaga fish that have followed the light of bimole (large burning reed bundles) on the canoes conducting nocturnal fishing expeditions

Dirt road leading from Uvira to Fizi, winding itself along the shoreline of Lake Tanganyika. 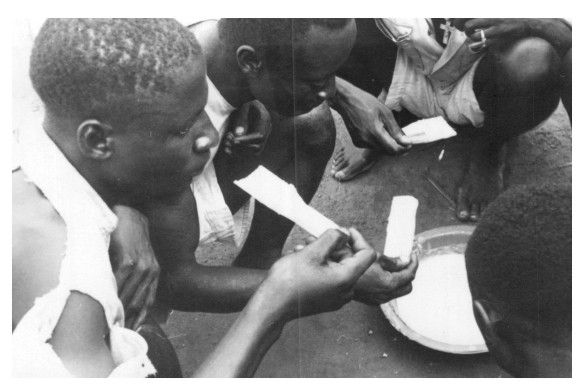 The four men on the left of the photo work as a team for the nocturnal fishing of ndagaa. 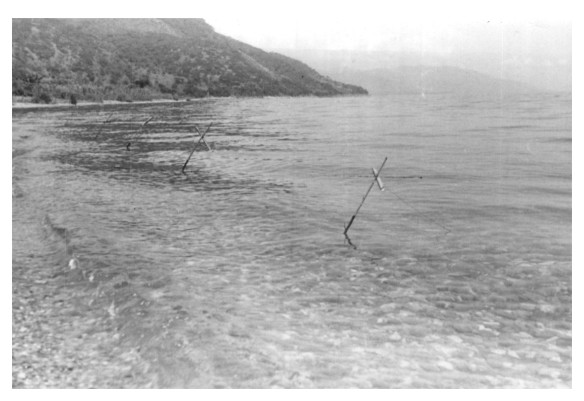 Fish hooks permanently implanted on the shoreline in order to catch fish. 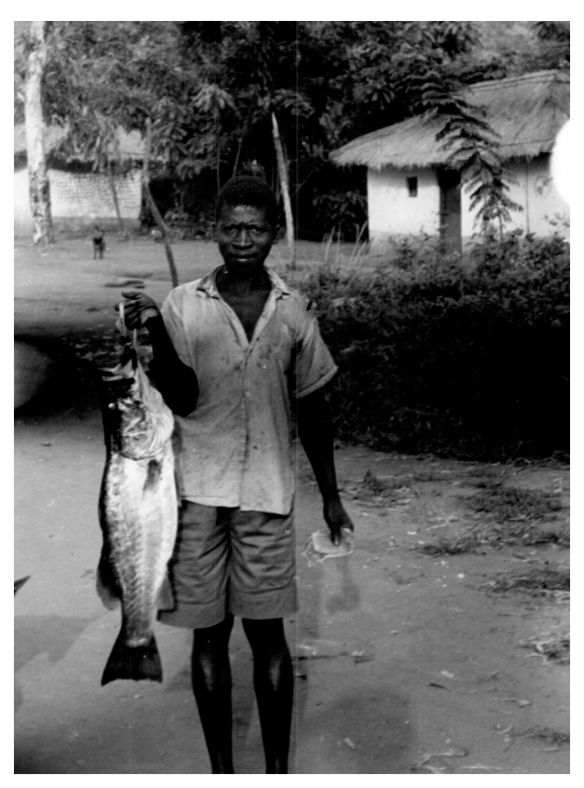 Man with a large ngomba fish, one of the finer fish to be found in Lake Tanganyika.

Views of the shores of lake Tanganyika; note that villages were built very close to the shoreline. 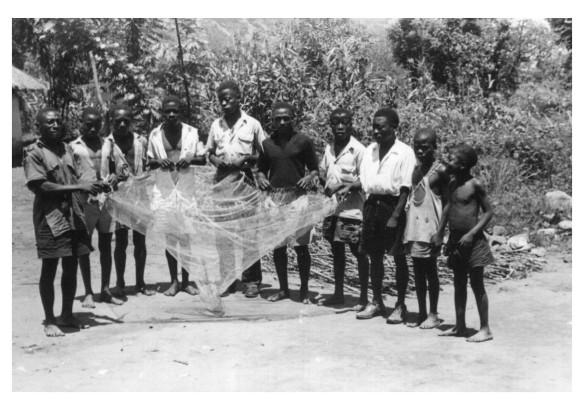 Young men showing a large fishing net with which the ndagaa (sardine-like fish) are scooped out of the lake into their canoes. This type of net is used in nocturnal fishing parties when the fishermen let their canoes slowly drift from far into the lake and attract, by means of torches of reed bundles (bimole), large schools of fish to the shallow waters of the shore.

Women working in the cotton fields imposed by the colonial administration.