Photo above:  Made in about 1947 by A. De Rycke, “chef de territoire Fizi.” A large group of elders administratively recognised as: “chef de secteur,” “chef de groupement,” “grand notable,” and “grand chef de village,” with some of their policemen. They are gathered in front of Adolphe De Rycke’s tent for a large “conseil de territoire.” the traditional chief of the Bwari people. Seated at the center of the entire group, is a high-ranking member of the Bwami association. 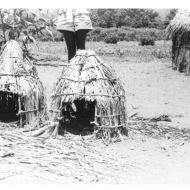 Villages are generally located in the high mountains; few are in the valleys, but some had, under the colonial system, been established on and near the shores lake Tanganyika. In the fifties, many village sites were the result of regrouping imposed by colonial administrators. Traditionally, the Bembe occupied small hamlets. One could still find the traditional circular houses (msonge), but for the majority, the form, materials, and general village layout were imposed by the colonial administration: two long rows of mainly rectangular houses on either side of a long plaza.

The shrines have several generic names such as ilumbi, ‘asa’o,  ‘etabo, and ‘abwasa. They are generally constructed near the houses; they are linked with cults for the nature spirits (maseko), twins (‘mmasa), river spirit (m’tambala), chtonic spirit (‘yangya) and also ‘mkangyalukulu, the dominant spirit of Lake Tanganyika, and the spirits of the ancestors (basumbu). Some are dedicated to children born in an “abnormal” way (e.g. feet first). In the early fifties, the number of shrines in a single village could be as high as twenty-five (not more than 100-200 people). The traditional cult system was extremely strong notwithstanding the intensive process of evangelization and colonization. In these shrines, one sometimes finds a carved wooden figurine linked with the ancestor cult or the water and chtonic spirit. One mostly finds stones, laying flat or planted in the soil, collected from a river or mountain with which the village is associated. They are linked with the nature spirits who are said to dwell in these stones. In some shrines, one also finds small termite nests that are adorned with red and white horizontal lines. 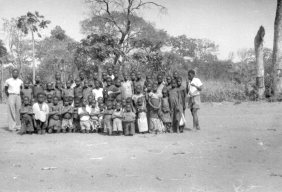 The color photos represent women involved in the Uhulana ceremony linked with the  arrival into the village of a newborn baby (birthing place is on the outskirts of the village). On their arrival, the women present the child to a grandfather who is sitting in the men’s house, who will give the child its first name.

Several photos illustrate dances by bami and also some “elementary” aspects of ukema ping (to learn= be initiated to, the high pinji grade). The dancers are mainly from the following clans or sections of clans: Basi’ungwa, Basi’ama, Basikusoke, Basi’ka’unga. These are staged presentations organized for me by the highest-ranking biciba, Mr. Mnyaka of the Basimnyaka clan. This is the first time that I saw anything like this among the Bembe and with respect to the Bwami in general. He staged a performance of a ci’o in recognition of the fact that I managed to lift his exile to the administrative center of Fizi. He also wanted to make me understand that there was much more to know than what I had seen up to then. He and his colleagues gave me some objects in the ci’o, including a wooden dog (mbwa w’ingwi) and a figurine (a’se’a) that was subsequently stolen from my house on the campus of Lovanium.

This was a very important moment in my life because it made me realize I had to go beyond the simple dances that were performed. 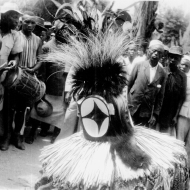 Photos made in November 1950 in Lubumba village within the Ngandja-lac chefferie of the Bembe, territoire Fizi.

‘Alunga masker surrounded by initiates of the ‘Alunga association visiting a Bembe village in order to settle village problems (1950). This mask was later given to A. De Rycke, chef de territoire in Fizi for his favorable support of this administratively dissolved association. He donated it to Tervuren Museum (1954); currently, it preserved in a rather damaged state at the Museum (for a photo, see A.M Bouttiaux, Persona (2009): plates 206, 214, 215.

For detailed information on ‘Alunga, see Daniel B. Biebuyck, The Arts of Eastern Zaire (vol. II, 1986).

It is to be noted that ‘Alunga is not one of the ancient Lega-derived Bembe traditions – like Bwami. It was introduced by the Basi’alanga clan, which has a non-Lega origin, and spread out to a few areas in Bembe land.

The above photos portray the visit of ‘Alunga in a Bembe village inhabited by members of various lineages of the Basi’muma. The mask is surrounded by numerous male members of the ‘Alunga association: notables, village headmen, or judges recognized by the colonial administration. One also sees a man carrying a rather elementary barrel-shaped drum with membranes on both sides, with which he accompanies the chants of the participants. Also visible is a man handling the bi-colored (red and white colors) billhook with which he guides the masker, who can only see through a small hole in the mask.

When ‘Alunga enters a village, it is mostly to exercise his rights of social control. When he is in a resting position, ‘Alunga utters, in a hoarse guttural voice, various decisions made by the association.  ‘Alunga slowly rises to dance in full swinging movement encouraged by hand clapping and songs by the acolytes and guided by the person with the wooden billhook. See Biebuyck African Arts 1973. 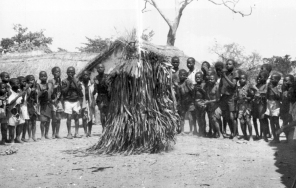 Young men’s association aiming at gradually introducing the youth to the rites and teachings of the ‘Alunga association.

‘Elanda is a men’s association. 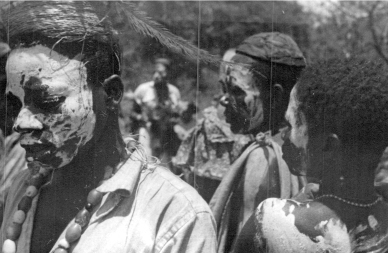 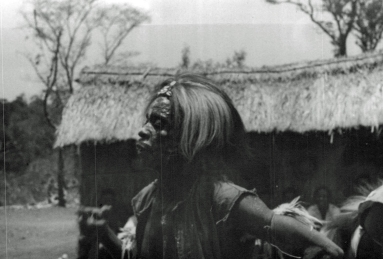 A men’s semi-secret association involved in divination, trance, and healing.

Photos made by Adolphe De Rycke before 1945.

Photos taken in November 1950 by Daniel Biebuyck in Lubumba village along lake Tanganyika. The dancers are mainly of the Basimnyaka clan, secteur Tanganyika. The chef de secteur is Risasi, Fizi territory.

“Ever, since men and women have been on earth, there have been misunderstandings between the two sexes. Women are weak, but they have their own secrets, as men have theirs. We keep these secrets very jealously and never will men know them; if they did, their power would be even greater.”

Among the numerous closed associations (Bibu’a), the women’s Buhumbwa association, like its equivalent the bwami male association, is considered to be an ancient Lega related patrimony of the Bembe dating back to the time they separated from the Lega. The members are women, married women with children, mostly wives of the men initiated to the Bembe type of Bwami.

The Buhumbwa association is to some extent the equivalent to female grades called Bombwa, Bulonda, and Bunyamwa among the Lega. But the internal structure is much less developed. The hierarchy seems to be reduced to a minimum: most of the members are called Mungu, but the senior initiates, all of advanced age, hold the title of Lubungyo, the highest grade which is based on age and initiatory knowledge.

The latter have many privileges: In the closed space of the initiation house, separated from the other women by a screen of banana leaves, they can sit on an ‘ecumbestool, they can beat the drums, they can do percussion on bamboo sticks – as can be seen in some of the photos: doing percussion on bamboo sticks (photo 1); beating an unseen drum (photo 3); sitting on a stool (photo 4). Most of the women shown in these photos are Lubungyo status, that is, the highest grade.

All of the photos show members of the association in dance movement or just posing.

As a group, these women are considered by men, even by their Bwami-initiated husbands, as “very dangerous” , powerful, and they are feared as potential sorcerers. This is because they possess a vast amount of medicines and have other powers.

One of the great preoccupations of the association is to create a spirit of solidarity among women and to protect them against the demands of the Bahumba spirits and the threat of ritual pollution.

The Bahumbwa rub their bodies with red power and put designs in kaolin on top of the reddened bodies. They wear strings of beads, some as necklaces, some as belts, some as shoulder straps, bordered with chicken feathers (enyamamba).  In ance the majority of them hold 1 or 2 iron bells, some have also bells at one ankle

The association is organized in local regional cells with centralization. They guard the basket with their initiation objects and know how to apply a great number of medicines. It is also said that they have a mask called ‘A’ungu, which, in fact, seems to be an outfit of some white bark cloth, the feathered snakeskin (enyamamba) and a sort of camouflage with feathers and a mirror around a reddened face.