Photo above: Cattle of Rwanda breed belonging to the supreme Vira chief grazing on his lands.  In addition to being agriculturalists, most Vira are pastoralists as a result of Rwanda influence. 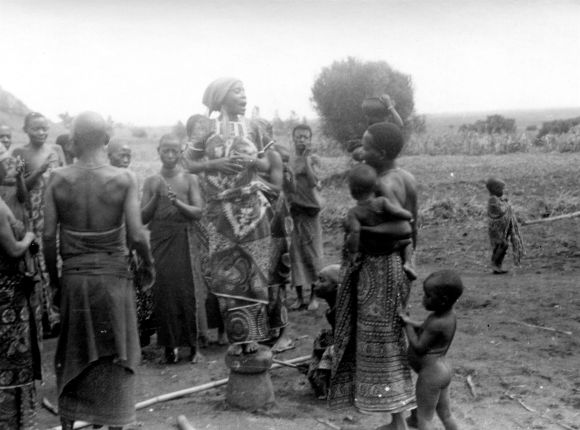 The photos taken by Daniel Biebuyck at the Kavimvira market (boundary of Congo and Rwanda) probably in late 1949 and in Rugongo village in March 1952.

Photo 1: Chief Makumika (Mwami in local exile), wearing on top of his head the ishungwe crown made of a large shell and headband, containing medicines and the exuviae of his predecessors. As the supreme chief of the Vira, Makumika, who belongs to the Banyalenge clan, has the sole right to wear this ishungwe crown, which is also the privilege of the supreme chiefs among the Havu, Shi, and Nyindu. The crown, which the chief wears from morning until evening, is put on and removed from his head by one of the eight political-ritual officials (called bazyoga since the chief is not allowed to see the crown).

NOTE on the ishungwe crown (based on DB research and data from Moeller and Schumacher 1949; see also article by DB in Africa-Tervuren, 1980):

Symbol of Bwami, it is made at the enthronement rites of the chief, organized by the Bazyoga ritual experts. Among them, the Nakasinga makes the band in which certain roots are hidden. Nakasinga is also the guardian of the Kasinga, mountain of the spirits (no wars are fought there; no menstruating women are allowed there). In earlier days, the Mwami wore the shungwe from morning till evening. Nalukanga (also a member of the college of Bazyoga) put it on and took it off, always standing at the back of the chief who must not see it. It is rubbed with oil by Nalukanga. The Bazyoga initiators-dignitaries: most of them wear the fita headdress, made of leopard hide; two, however, wear a genetta tigrina hide headdress. Once a Mwami gets the ishungwe, his hair cannot be cut until his death.

In Ijwi island (mix of Shi and Tembo, Schumacher 1949 p. 262), the ishungwe comprises: two upper incisors of the dead chief; a piece of forehead bone; the first part of the right index and right toe; the mummified prepuce (removed five days after the death of the chief, dried in bark over fire, and adorned with cowries); four pieces of copper and four pieces of iron. The ishungwe is a finger long and measures three centimeters in diameter; it hangs from a special band from forehead; it is said mostly that this is the membrum (umushiri) itself, but this is denied in Ijwi.

Among the Bahavu people (Schumacher 1949 p. 290), the ishungwe consists of a pouch (Hülse), made of lizard skin, with two shells. In the pouch are: 16 copper lamelles each 4 cm long; small parts of the deceased chief’s membrum, tongue, right big toe, chin, right ear, hair from armpit, two incisors, all put in resin (shangi) obtained from Butembo and then placed in the pouch.

Among the Shi people (Colle, 1921, 663-671) Chief Kabare (not chief Ngweshe) wears on his forehead (sans jamais le quitter !!!) a diadem that contains parts of the body of his dead predecessor; he also keeps the skull of his predecessor. According to Colle, this is made by Niganda and Namukima (a Pygmie) and guarded by Niganda.

Photo 3: On the left of the photo, is seen a very old person named Sikalogota who is one of the eight political officials linked with the chief.

Photo 4: A woman wearing a dress made of Western-made cloth stands on a rudimentary stool, acts as a medium in healing and divination rights linked with the cult of Nyabingi. Note that a woman accompanies her singing by beating a bamboo-like percussion stick.